Over Brutality Against Journalists In Liberia 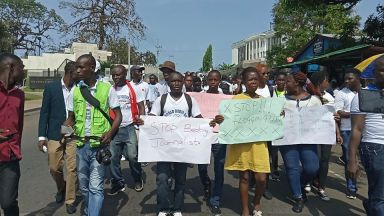 Whereas, the Press Union of Liberia is an umbrella organization of Journalists in Liberia founded on September 30, 1964 primarily for the protection and the provision of a safe working environment for Journalists and media workers.

Whereas, since the foundation of the Union, there continue to be attacks, detention, intimidation and suppression of the media and media workers with several colleagues losing their lives to tyrannical and brutal security officers with impunity.

Whereas, these brutal attitudes towards journalists remain a major challenge for the Press Union of Liberia with successive governments doing little or nothing to advert this maltreatment of Journalists simply for doing their Jobs.

Whereas, the protection of free speech, freedom of the press and protection for media workers are fundamental rights under the Constitution of Liberia, the United Nations Convention on people and Human rights and the African Union convention on Human Rights.

Whereas, in recent months, the attacks, detention, intimidation and brutality meted against media practitioners have become unprecedented with seven Journalists being attacked just in two weeks and ten attacked in three months across the country.

Whereas, PUL considers these attacks, detentions, intimidations and brutality against media personnel as deliberate attempts to force journalists into self-censorship and deny the public of credible, balanced and accurate reports of the operations of the government.

Whereas in January 2020,the Late, Journalist Zenu K. Miller complained of being whipped by some officers of the Executive Protection Service while trying to leave the Samuel Kanyon Doe Sports Complex where he was providing radio commentary for Okay FM at the finals of the National County Sports Meet.

Whereas, the Government of Liberia failed to launch an investigation into his flogging long before his death.

Whereas the Government of Liberia only apologized for its failure to promptly investigate and offered to conduct an autopsy after the journalist`s death which was refused by the family.

Whereas, another Journalists Christopher Walker, reporter at FrontPage Africa was brutally flogged by some officers of the Liberia National Police at a semi-final game of the National County Sports Meet and the LNP yet to investigate and penalize the officers who whipped the journalist.

Whereas, a Journalist in the Southeastern County of Maryland, Bryant Duo, was assaulted by officers of the Liberia National Police at a checkpoint in Rivercess County, while travelling to Harper from Monrovia. Duo had sought to board another vehicle after going through the security check since the check of the vehicle and other occupants was prolonged.

Whereas in February 2020, Journalist Kennedy Koloh, Manager at the Rivercess Broadcasting System was attacked by officers of the Liberia National Police and briefly detained in Yarpah Town, Rivercess County while travelling to Buchanan, Grand Bassa County. Police alleged that Journalist Koloh was arrested on a commercial motorbike for crossing a police checkpoint without regards for a stop order. Journalist Koloh denied the claims, insisting he was arrested after refusing to pay bribes to the police at the Checkpoint. He`s been critical of police operations in the county.

Whereas a week earlier, Methuselah Technocrat Gaye, a Fabric Radio Correspondent in Rivercess County was arrested and detained at the Yarpah Town Police Detachment after being accused of allegedly posting on his Face Book page unverified information concerning the police commander of the region, Fasu Sheriff.

Whereas, Josephine Seekey, a female reporter was pulled off a motorcycle by a police officer on her way from work. Seekey was badly injured. Motorcycle is a fastest means of commuting in Monrovia.

Whereas this month , freelance Journalist Kolubah Akoi was arrested and incarcerated by the Liberia National Police Criminal Investigation Unit in Voinjama, Lofa County, in the north of Liberia. Journalist Akoi was charged with criminal malevolence, criminal solicitation and publication of classified sensitive financial documents about the Lofa Community College.

Whereas a reporter of Cyclone Newspaper, Benjamin Toby Johnson spent a night in police custody in Gardnersville, a Monrovia suburb, for simply inquiring about a report of a police officer discharging fire arm during a land dispute in the community.

Whereas Journalist Salam Kaloko of Maggie Online TV was attacked by an agent of the Executive Protection Service (EPS) while covering a protest of War & Economic Crimes Court advocates. Kaloko was beaten, his camera, cash, telephone and other broadcast equipment forcefully taken away.

Whereas Journalist James K Kadi of the New Newspaper was wounded after being attacked by an officer of the Liberia National Police while in route to central Monrovia on a commercial vehicle.

And whereas, the Press Union of Liberia has communicated with the relevant security agencies whose officers perpetrated these attacks against Journalists with no action or investigation undertaken to address these complaints of maltreatment.

Now therefore, the Press Union of Liberia calls on the President of the Republic of Liberia, His Excellency, George Manneh Weah to commission a transparent and broad-based investigation of the accused security agencies and their officers, complicit in these wonton human rights violations with the view to penalize those who will be found guilty.

The Press Union of Liberia also calls on members of the international community, including ECOWAS, African Union, European Union, United Nations, United States of America, United Kingdom, and other nations that believe in the principle of a free press to bring pressure to bear on the Weah administration to immediately commission the investigation and bring the perpetrators to justice.

PUL also makes a clarion call to international media advocacy and human rights organizations, including the Center for the Protection of Journalists, Reporters Without Borders, Freedom House, Amnesty International, Human Rights Watch to pressure their partners and governments to insist that the Weah Administration sets up this probe to bring the alleged perpetrators to justice and stop the intimidation of the press.