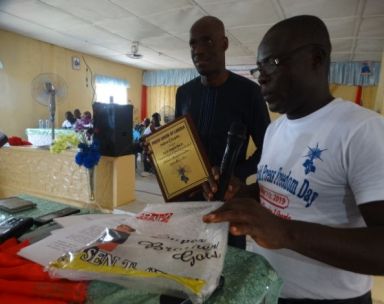 The Press Union of Liberia (PUL) in conjunction with other journalists across the world recently concluded the celebration of events marking world Press Freedom Day. The events which commenced Wednesday May 1 climaxed   on Friday, May 3, 2019, in the coastal city of Cesto, Rivercess County, Liberia.   This year’s Celebration brought together Journalists from across the Country as part of PUL’s relentless efforts aimed at decentralizing the activities as well as mainstreaming every journalist, regardless of gender, background and location.

The Celebration was characterized by a parade of Journalists through the principal Street of Cesto City, and an indoor program at the Cesto City Hall.

Hon. Bill Twehway, Managing Director of the National Port Authority, served as the Keynote speaker.  Hon. Twehway is calling for partnership between the government and the media realizing that could enhance the smooth workings of government and strengthen press freedom in the Country. Meanwhile, the NPA boss urged the Liberian media to abstain from the condition of using its platform to spew profanities on government officials consistently as such practices by the some media institutions have the tendency to sour partnership between government and the media.

However, Hon. Twehway realized that today citizens’ trust in the media discourses is eroding dangerously because the media is faced with series of challenges which could undermine their role as a cornerstone of democracy.

The President of the Press Union of Liberia (PUL) Mr. Charles B. Coffey Jr., in a remark said the decision to carry this year’s Press Freedom Day to Rivercess was a reflection of the reality that no part of the Country can go forward without the others.

He said Journalists in Liberia cannot be successful at reporting on development if the issues are largely about politics in Montserrado; stressing that there are areas that remain isolated without their issues being reported.

“Fellow colleagues, we can never Communicate decentralization when we in the media refused to live it, so selecting Rivercess as the venue for this year’s World Press Freedom Day  celebration conveys the idea that observance of such event should at all times include real-life reportage of conditions on education, health, agriculture and others affecting our society,” President Coffey noted.

However, the Press Union of Liberia (PUL) commends the Liberian government for honoring its commitment in supporting the passage of the bill to decriminalize speech offense named in honor of the former PUL president the late KAK.  This will positively impact the lives and livelihood of Liberian citizens and contribute to overcoming the societal and structural inequities that were at the root of the Liberian conflict. Liberia is now considered as one of the countries in the world with an improved media environment.

He urged all media practitioners to report the truth, respect the rights of others and works for the greater good of humanity.

May 3rd of every year is observed as World Press Freedom Day to raise awareness on the importance of Press freedom and remind governments of their duty to respect and uphold the freedom of expression law adopted at the 26th session of the UNESCO General Conference in 1991.