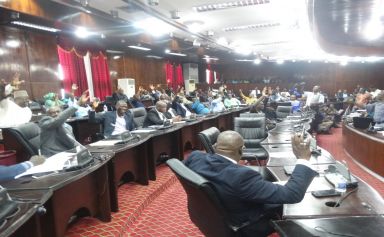 (Monrovia, July 3, 2018)- The House of Representatives has voted to pass into law a bill seeking the repeal of Anti- free Speech Legislations in Liberia.

Presenting the outcome of a public hearing on the Bill titled, an Act to amend the Liberian codes revised, penal law of 1978, of the Republic of Liberia, the Chairman of the House Committee on Information, Hon. Jay Nagbe Sloh urged the plenary to pass the bill because its ideal promotes democratic culture.

“What we have not been able to establish is to put a law of this nature or any law for that matter in the name of an individual. We have established that indeed the late brother Kamara have worked too hard for the passage of this law but there are many other ways that the Press Union of Liberia, the Government of Liberia can work together to honor him…..”

President George M. Weah in his resubmission of the bill has suggested as when passed by the legislature the Law will be known as the “Kamara Abdullai Kamara Act of Press Freedom.

“….If you can name that headquarters, the first in the history of the Press Union of Liberia in his honor instead of this law. So we are recommending, the Judiciary Committee and the Committee on Information, Cultural and Broadcasting that we pass the law as is from the President but we should exclude the name of Mr. Kamara.”

The discussion on the decriminalization of free speech offenses soon became solely about the significance of honoring fallen former President of the Press Union of Liberia, Kamara Abdullai Kamara after the bill.

For his part, Bomi County, Rep. Edwin Snowe intimated that apostrophe laws are spread across different jurisdictions and that President Weah selection of Kamara Abdullai Kamara is commendable.

“I want to commend the Press Union and Mr. Kamara, may his soul rest in peace that with his advocacy and his fight for press freedom in Liberia, that this House today will take an action, championing Press freedom and remembering the good work of Mr. Kamara”.

After all the disagreements and rejection of a motion for reconciliation, the House of Representatives voted to pass into the full force of the law, an Act to amend the Liberian codes revised, penal law of 1978.

Meanwhile, the Press Union of Liberia has hailed the House of Representatives for the revolutionary work executed for the good of the Liberian Democracy.

Press Union of Liberia, President, Charles Coffey told reporters that the lawmakers’ action is in  right direction as the country attempts to honor its obligation on guaranteeing free expression.

“We just want to hail the committee for the hard work for the passage of this Bill. We think it is in the right direction and that Liberia will now become a compliant to international convention as regard to media laws,” Coffey said.

Liberia signed the Declaration of Table Mountain on 21 July, 2012 as a necessary step towards repealing laws that hinder press freedom and other rights to free speech in Liberia.